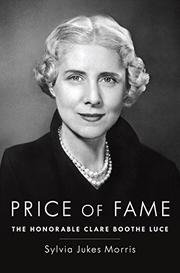 The second volume in the life of a significant American figure.

By the time she was 40, Clare Boothe Luce (1903-1987) had been an actress, Broadway playwright, war correspondent, managing editor of Vanity Fair and Republican congresswoman from Connecticut. Married to the enormously wealthy publisher Henry Luce (Life, Time, Sports Illustrated et al.), she went on to become the first woman ambassador (to Italy, appointed by Eisenhower) and, after her conversion to Catholicism, author of several books on religion. Luce held political views passionately: A fierce anti-communist, she was equally outspoken in support of civil rights for African-Americans. Morris (Rage for Fame: The Ascent of Clare Booth Luce, 1997, etc.) earned Luce’s trust and access to more than 460,000 items in the restricted Luce Collection at the Library of Congress. Blonde, beautiful and glamorous (Morris includes details about Luce’s sumptuous wardrobe at every occasion), she took many lovers, with a special preference for men in uniform. Her “compulsion to charm” was, writes the author, “a drive more for devotion than sex. She wanted to conquer all comers, even though her interest in them could be short-lived.” And conquer she did: Both men and women succumbed, with the notable exceptions of Harry Truman, who refused to receive her at the White House, and Cyrus Sulzberger, chief foreign correspondent of the New York Times, who “was appalled” by her “arrogant conceit” and “ruthlessly hard-boiled self-assurance.” Luce’s frenzied need to engage in all-consuming work was fueled by a daily round of stimulants and sedatives; she fell into black depressions and paranoia, especially if she felt rejected or ignored. Desperately, she needed to be the center of attention.

Luce once contracted to write her autobiography, which she planned to call The Dream of My Life. Morris perceptively reveals the nightmare in this evenhanded and intimate portrait.