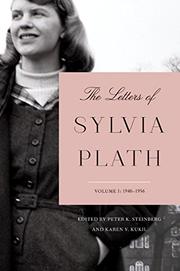 THE LETTERS OF SYLVIA PLATH VOLUME 1

A monumental gathering, in the first of two volumes, of the scattered correspondence of the now iconic—and canonical—poet and novelist.

Although her name is a byword for tragedy, Plath (1932-1963) was a talented writer whose life merits more currency than as the depressed wife of British poet Ted Hughes. Much of Plath’s promise is revealed in this collection of letters from 1940 until her marriage to Hughes in 1956. These letters alone serve to solidify her reputation as a skilled, thoughtful observer of the world and her own psyche. As Plath scholars Steinberg and Kukil note, an early collection of Plath’s correspondence, published in 1975, was incomplete and marked by editorial omissions and alterations; their aim in this project is “to present a complete and historically accurate text of all the known, existing letters to a full range of her correspondents.” In this, they have been remarkably successful. If some of the letters, especially the early ones, are of the mundane sort (“my complexion is showing signs of improvement daily,” writes the self-conscious teenager), this inaugural volume makes for a multifaceted portrait of a thoughtful young woman who might have gone on to even greater accomplishments than she did—and these, we learn here, extended to art and philately as well as literature. Knowing how the story ends prompts readers, of course, to seek signs of Plath’s later difficulties in these early pieces, many of which are of a confessional nature and written as if with an audience in mind. Indeed, such signs are to be found, as when the collegiate Plath writes to her mother, in a time commemorated by her novel The Bell Jar, “the crux of the matter is my attitude toward life—hinging on my science course. I have practically considered committing suicide to get out of it….I have become really frantic: small choices and events seem insurmountable obstacles, the core of life has fallen apart.”

A literary milestone: essential to any student of Plath’s work and, by extension, of modern literature.