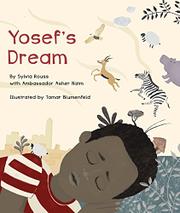 by Sylvia Rouss with Asher Naim ; illustrated by Tamar Blumenfeld

A dream to return to their Jewish homeland becomes a reality for Ethiopian Jews.

As the narrator watches his brother become a bar mitzvah at Jerusalem’s Western Wall, he remembers his childhood in Ethiopia and the journey to their homeland, Israel. For generations, Yosef tells readers, Jews in Ethiopia believed that they “were the only Jews left in the world!” In his reminiscence, Yosef leaves his mother and sister to take food to his father and brother working in their fields before heading to school. He falls into a deep hole and cannot climb out. In a folkloric turn, Gazelle comes to him in a dream and promises him mountaintop visions of “far-off places.” Hyena then promises meals “of the scraps of others.” Finally, Eagle swoops down and promises him a flight to a new home. When he finally arrives at school, an Israeli official announces that they “can return to the land God gave to the Jews.” Preparations are made, and Yosef’s family boards the eagle, as foretold in Isaiah (40:31)—only now it is an airplane. An author’s note informs readers that in 1991, co-author Naim, the Israeli ambassador to Ethiopia, did in fact organize Operation Solomon, bringing home thousands of Ethiopian Jews. Blumenfeld’s colorful illustrations give the dark-skinned people and the animals personality and set the location memorably.

Modern Jewish history lives through the moving voice of one participant.