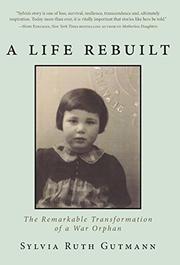 The Remarkable Transformation of a War Orphan

In this debut memoir, a woman recalls her childhood escape from Europe after the Nazis murdered her parents and the traumatic aftermath.

Gutmann was born in 1939 in Belgium, only months after her Jewish parents were forced into exile from their home in Berlin, fleeing the Nazis. They lived in hiding but were ultimately discovered by Vichy agents. In 1942, when the author was 3 years old, she and her mother and two older sisters were held captive at an internment camp in France. Her mother was then shipped to Auschwitz, where both of Gutmann’s parents were eventually killed. “In the face of the unknown,” the author writes, “Mama made a heart-wrenching choice to leave us behind with a stranger who promised to save our lives.” The author and her siblings were furtively sent to Switzerland by this mysterious woman. Gutmann stayed with an aunt in Zurich before leaving for New York by boat with her sisters in 1946. The author lived with her Uncle Sam and Aunt Gerdy and was ordered to forget her harrowing past. A second-grade teacher—at 7, Gutmann had never attended school before—accused her of lying when she spoke frankly of her travails. And Gerdy was mercilessly cruel, physically and verbally abusive. The author sought solace in the arms of exploitive men, and by 23 had weathered a string of failed relationships and two abortions. When her sister Rita, whom she idolized, died after a long illness in 1993, Gutmann was compelled to confront the pain of a lost childhood. In the hope of finding emotional resolution, she traveled to Germany and France, attempting to find the woman who had saved her life. The author’s story is heart-rending, told with an unflinching confessional candor (Recalling the stressful voyage to New York, she writes: “To every woman on the ship who looks kindly at me, I plead, ‘Will you be my mommy?’ ”). She delicately depicts the psychological fallout of the Holocaust—those who survived were pulverized by guilt, and the resources necessary to help them didn’t really exist. As one of Gutmann’s therapists explained, “For three decades, the traumatized survivors and guilt-ridden American Jews, who regretted that they had not done more to rescue their brethren, were frozen in silence.” This is an achingly beautiful account that includes emotionally affecting personal photographs.

An insightful effort to bring some clarity to an incomprehensible wartime catastrophe.