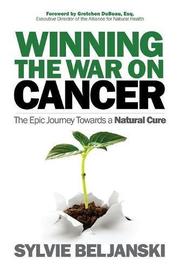 WINNING THE WAR ON CANCER

The Epic Journey Towards a Natural Cure

A lawyer recounts her attempts to promote a natural cure for cancer in this debut medical memoir.

Beljanski’s parents, Mirko and Monique, were French cancer researchers who discovered two plant extracts with the power to eliminate cancerous stem cells while causing no harm to healthy cells. (If the stem cells are not killed, “the tumor will soon grow back.”) Although these findings were not widely known, the author’s parents had a highly successful treatment rate. Their most famous patient was none other than the long-serving French President François Mitterrand. But, according to Beljanski, the use of the extracts on Mitterrand exposed her parents to the ire of the French medical and political establishment: “Anything natural that works better than synthetic drugs is perceived as a frontal attack on the entire economy of pharmaceutical companies….The products, the man who conceived them, and all the know-how surrounding them must be destroyed.” Soldiers were dispatched to Mirko’s lab to arrest the couple and seize whatever research they could find. Across the sea in New York, Beljanski, an attorney who had never taken an active role in her parents’ work, became immediately drawn into the case, not simply to free them but to ensure that the people who had become reliant on the treatment they had engineered could continue to receive it. Following her father’s death in 1998, she created the Beljanski Foundation to promote and advance his research. The author has been trying to bring attention to the potentially cancer-obliterating powers of plant extracts ever since, though she has found that the medical establishment is no less powerful or self-interested today than it was when it sent those soldiers to Mirko’s lab. Beljanski writes in an energetic prose that lends much tension and drama to her narrative: “I hurried to open the door when I heard a knock, and if I was unnerved by the words spoken to me by Gérard the day before at the cemetery, it was nothing compared to what I felt when I opened the door.” Indeed, the great success of the book is as a nonfiction thriller, with the Beljanski research as a Holy Grail at the center. In this way, the volume is an entertaining read, particularly given the high stakes of the research and the ongoing destruction wrought by cancer. The idea that the cure might be found in something as simple as plant extracts is highly attractive, and those already interested in natural medicine should be sympathetic to the author’s cause. But it’s difficult to take Beljanski completely seriously given the conspiratorial bent of her narrative. (She all but alleges that the French government was attempting to draw out the investigation into her father for the purpose of exhausting and killing him: “When the defendant dies, the prosecutor no longer has to prove his case.”) There is also the indisputably promotional nature of the book to consider (the author is a conference speaker). It’s a compelling yarn nonetheless, and it does grant a window into the intriguing, competitive, and moneyed world of cancer research.

A dramatic account of a controversial natural cancer treatment.