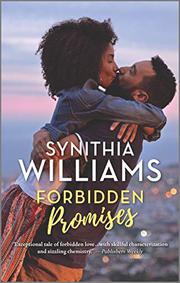 A violinist tries to ignore the attraction she feels toward her sister’s ex-husband.

Years earlier, India Robidoux suppressed her feelings of attraction toward her sister Elaina’s on-again, off-again boyfriend, Travis Strickland. India and Travis shared an incendiary kiss on the night of her 22nd birthday while he and Elaina were on a break. India hoped it would be her chance with Travis, but she was devastated when Travis instead proposed to her sister two weeks later. Unable to cope with her feelings, India fled and spent the next six years in Europe playing violin with an international orchestra. India finally returns home to Jackson Falls, North Carolina, intending only a brief stopover before an audition with the Los Angeles Philharmonic, but she’s immediately pulled into the family orbit to support her brother’s Senate campaign. The romance between India and Travis is on the back burner as Williams (His Pick for Passion, 2019, etc.) introduces the Robidoux family and many substantive but soapy subplots, most of which center on the machinations of India’s father, Grant. As the CEO of Robidoux Tobacco, Grant has meddled in his children’s lives to shore up the respectability of the family and the company. India loves her father but is determined not to let him decide her fate. As she and Travis reconnect, they find it impossible to ignore their simmering attraction. Travis is less hesitant about his feelings for India, not willing to make the mistake of letting her go again. Even though the romance gets off to a slow start, this is a pleasingly angst-y novel about forbidden lovers finding each other.

A romance for readers looking for equal parts passion and family drama.