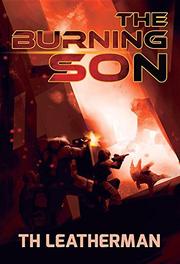 From the Burning Son series, volume 1

Rendered fugitives after religious fanatics bent on conquest attack their planet, a brother and sister join a motley band of interstellar smugglers in this sci-fi series opener.

In the spacegoing future, Earth’s empire (aka the Terran Confederation) competes against two principal races, the amphibious and psychic Dru and the foxlike engineering geniuses the Muscat. Mutual suspicion and rivalry have prevented these three mighty forces from forging an effective, united front against the new bad guys on the scene: the bullying Erethizon, descriptively nicknamed “Porcu-bears,” hairy near barbarians (barbearians?) who are driven by a jihadlike religious crusade to seize control over every world they can get their claws on. Nonallied, independent planets are the easiest pickings, and an Erethizon fleet blitzkriegs the human settlement of Yale. The act makes refugees out of two citizens who would have been prize hostages for the invaders: navigator Mark Martin and his medic sister, Sophia, both military-trained progeny of a popular Yale senator. In desperation, the siblings bunk aboard the Leonard Fox, a tricked-out freighter that is really a pirate vessel (more of a smuggler ship, actually), making shadowy cargo runs for a galactic crime kingpin under the businesslike command of Capt. Jennifer Houston. Equality between the sexes, for the most part, is a sidelight of the universe Leatherman (Marque of the Son, 2017) builds. The newcomers integrate with the diverse crew even as continual harassment by dogged Erethizon pursuers strongly suggests there is something onboard the Leo that the conquerors desperately want—and that there may be a traitor in the crew helping them. The author begins a multivolume space-opera saga in breezy, rousing fashion. The novel is an enjoyable setup, lean in prose, pithy in dialogue (“We rely on blockade runners like Captain Houston over there. They charge us like a bathroom call girl, but we gotta pay to dance”), and generous with action and motley characters delineated in sparse, broad strokes. (Even if protagonist Mark, through whose eyes the first-person narrative unfolds, could have used a bit more color.) Readers who want fuller details of the history, technology, cultures, and intrigues (particularly the late-appearing “bear zombies”) skillfully dreamed up by Leatherman will be strongly lured into charting a warp-speed course for the sequels.