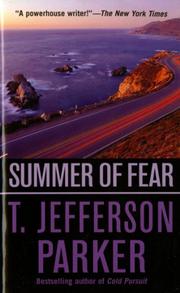 In three novels, Parker (Pacific Beat; Little Saigon; Laguna Beach) has proven himself a master of the California thriller. So he can be forgiven for this ill-crafted amalgam of serial-killer chiller and tragic love story. Parker's narrator here is Russ Monroe, true-crime author and reporter for the Laguna Journal. As the story begins, two calamities plague Monroe: the slow death of his wife, Isabella, from a brain tumor; and the murder of his ex-lover, supermodel Amber Mae Wilson, whose savaged body Monroe finds in her home. Amber's death bears the hallmarks of the serial killer known as the Midnight Eye—except that, just before Monroe entered Amber's home, he spied Amber's ex-husband, Laguna homicide cop Martin Parish, wiping fingerprints off the outside gate. When the crime isn't reported, Monroe returns to the killing ground and finds the body missing but Parish lurking about. Monroe suspects Parish of the crime, while Parish claims innocence and accuses, then tries to frame, Monroe: Both are in Amber's will. But soon Amber herself surfaces—the victim was in fact her look-alike sister, Alice—even as Monroe and Amber's daughter turns up (did she help do away with Alice?), and as the Midnight Eye takes to calling Monroe at home, ranting about his crimes. Meanwhile, Isabella deteriorates—and endures an operation—as Monroe grieves for her and for his inability to save her, despite his pleasure in helping to i.d. the Midnight Eye, who escapes to N.Y.C. And then yet another possible Alice-killer surfaces—and he owns a copy of Bret Easton Ellis's American Psycho.... A soggy, slow-moving fog—out of which, however, the subplot of the writer and his doomed wife glows with heart-stirring radiance.