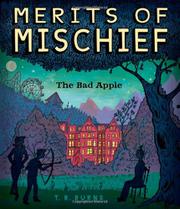 From the Merits of Mischief series, volume 1

Mischief has its rewards, especially at Kilter Academy.

Twelve-year-old Seamus Hinkle was a good student, a good kid, with a spotless record. Then during a brawl in the cafeteria, he wings an apple at a substitute teacher, hoping to startle her out of intervening and thus save her from near-certain injury—and kills her. He's sent to Kilter Academy for Troubled Youth. After his parents drop him off, Seamus finds things at Kilter aren't what they seem. It's a school to train professional Troublemakers. Pulling one over on the young faculty earns demerits, which equal credits at the Kommissary. Ratting on fellow students earns gold stars, which correspondingly reduce credit at the Kommissary. Weighed down with guilt, Seamus vows to be good, but he keeps inadvertently scaring or making a fool of his teachers and earning demerits. Why does the school’s enigmatic director have such confidence in Seamus? Will he ever feel comfortable letting his new friends know why he’s at Kilter? Burns’ (who’s also Tricia Rayburn, Siren, 2010) series starter has an interesting premise and some enjoyable moments. However, there are far too many loose ends at volume's close for this to be a satisfying read in itself. While Seamus’s turmoil is believable, he and the rest of the cast are a bit underdeveloped. The lack of solutions to the several mysteries make this more of a turn-off than a page-turner.

Perhaps once the series is complete, this will be something to recommend.