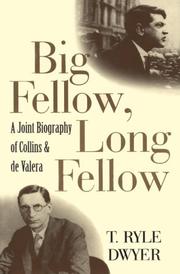 A Joint Biography of Collins and de Valera

An exhaustively researched, skillfully written joint biography of Michael Collins and Eamon de Valera, whose contrasting legacies shaped the history of 20th-century Ireland. Collins was a brilliant guerrilla leader who deployed selective assassination and deft counterintelligence to cripple Britain’s colonial administration of Ireland. So successful was Collins at rendering Ireland ungovernable that in 1922 British Prime Minister Lloyd George was compelled to seek a negotiated withdrawal. Collins was a realist: His token participation in the failed Easter Rising of 1916 taught him that idealists made the worst wartime leaders. His lifelong contempt for politicians contributed to his eventual break with de Valera. While Collins was mercurial, quick-minded, and gregarious, de Valera was methodical, slow- moving, and introspective. Irish historian Dwyer argues convincingly that the Collins—de Valera split was as much personal as political. Both men were ambitious and often unscrupulous in attaining their goals. De Valera, elected president of Ireland, feared Collins’s popularity and control of the army; Collins considered de Valera an untrustworthy demagogue. When de Valera ordered Collins to negotiate a peace treaty with Britain, a job for which he was particularly ill-suited, Collins suspected a trap. “To me the task is a loathsome one,” said Collins. “If I go, I go in the spirit of a soldier who acts against his judgment at the orders of a superior officer.” When an exhausted Collins returned from London with a peace treaty, de Valera attacked it as pro-British and implied that Collins had betrayed Ireland. Collins defended the treaty as a first step to full independence. The debate over the Anglo-Irish treaty triggered a bloody civil war, during which Collins was killed by anti-treaty forces. De Valera would remain president of Ireland for most of the next 50 years. An essential book for anyone interested in understanding the personal and political dynamics behind the fateful Collins—de Valera rift. (16 pages b&w photos, not seen)