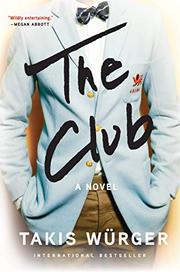 A young man infiltrates a secret university club and discovers a dangerous secret.

German journalist Würger’s debut novel begins with his protagonist, Hans, describing his idyllic childhood: “When I think back to the earliest years of my life it is always late summer.” A soft and curious boy, Hans lives with his parents in their home in a forest—a happy arrangement that ends quite suddenly. Years later, Hans—who is starved for friendship and family—receives an invitation from his aunt to attend St. John’s College, Cambridge. The offer comes with strings attached: Hans will have to investigate the Pitt Club, one of the oldest institutions on campus. The club is full of rich, privileged young men well-versed in secrets, debauchery, and something far more sinister. Aided by Charlotte, a fellow student, Hans is introduced into the world of the elite. Comprised of many different voices, the novel feels Greek chorus–esque. Some points of view only appear once (i.e., a shopkeeper’s) but others run through the entirety of the novel (i.e, that of Josh, an angry, toxic Pitt Club member who adores Hans). Made up of mostly short, uncomplicated sentences, the writing is also overwhelmingly evocative at times: “I told them how oranges tasted of adventure, and how the soft hair at the nape of girls’ necks sometimes looked like candyfloss.” While the crime at the novel’s center is not surprising, it serves as a catalyst for Würger’s interesting ruminations on class, violence, power, wealth, and masculinity. Many of these themes are also explored through boxing as Hans tries out for the university’s team. Boxing runs through the novel like a heartbeat—revealing the dangers of violent masculine camaraderie with every scene. The novel’s complicated ending touches on the problems of justice and redemption: who gets it, who deserves it, and its human cost.