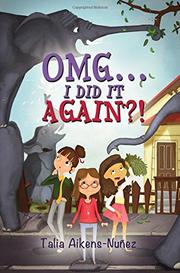 From the OMG series, volume 2

Now that she has become a witch, April encounters an unexpected challenge: without ever meaning to do it, she conjures up elephants in her dreams.

The elephants—real ones—roam through April’s neighborhood, sit on cars, eat the trees, and spray swimming-pool water everywhere. It’s chaos, and she’s not allowed to leave the house. Together with her friends Grace and Eve, she consults New Orleanian Eve’s Book of Magie, written in French, to find a solution. They realize that April has dreamed about getting the endangered animals to a safe place and that the dream worked! Now they must somehow sneak out of the house to gather items that April can use in a spell to put the elephants back where they belong, but April’s mom and dad are in the way. Can April get the items she needs, possibly including elephant poop, and work the spell properly? Can she understand the French in her book? And most importantly, will the elephants be all right? Aikens-Nuñez keeps her story light and breezy, milking elephant poop and the elephants’ antics for humor. She never implies any danger for anyone, except that April might get in trouble with her parents if they catch her sneaking out! April is white, Grace is Latina, and Eve is African-American.

A sweet romp for young readers who like humor and magic.