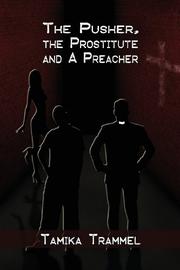 The Pusher, the Prostitute and a Preacher

Trammel (18 Years of Grace and Mercy, 2012) offers a novel about the lives of three intersecting characters and their relationships with God.

Benjamin lives in a pleasant condominium in Silver Spring, Maryland, and he’s doing quite well for himself, at least on the surface. He’s a college student by day and a drug dealer by trade, working for a man known to most people as “Hard Time.” The two are exacting and discreet, and, along with Benjamin’s friend Winn, they prove highly successful in a business that sends many others to jail; as Hard Time tells people, the reason he got his nickname is “because the police have a hard time catching my ass.” But how long will their luck last? Meanwhile, in New York City, an aging prostitute’s life is about to change. After a longtime customer offers her $10,000 if she’ll give up her profession, she sees it as an opportunity to return home to her troubled family. As she discards her street name, “Sunny,” for her given name, Hannah, she knows that a homecoming is necessary, though it certainly won’t be easy. Elsewhere, Marco Gibson has just been freed from prison in Virginia. After 20 years and nine months of being locked up, he’s determined to avoid the temptations of his drug-dealing brother, Hard Time. His main goal is to eventually serve his community and expound upon his Christian faith, but he knows well that the path ahead of him is steep. Trammel sets the stage for a collision of characters who are already connected, though they may not all realize it. Just what this collision will bring makes up the heart of this touching tale, which explores the choices that people make in life and their opportunities for redemption. The dialogue does veer toward the obvious at times, as when Marco explains that he doesn’t mind janitorial duties because “I’d rather push a broom in there on the low level than push drugs on the street in a low life.” Nevertheless, the story gets its lasting power from the qualities of its main characters’ personalities—people who may find themselves caught up in dire conditions but who ultimately find ways to look for light at the end of the tunnel.

Although this novel’s dialogue tends to lack panache, the story as a whole offers intriguing circumstances and outcomes.