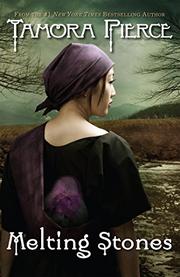 In this first print edition of a tale originally conceived of and published as an audiobook (2007), the magic of Evumeimei Dingzai, a rough-edged young stone mage last met in Street Magic (2001), is tested to its limits on (and under) an island afflicted with mysterious dead zones. It doesn’t take Evvy long to learn that the island of Starns is volcanic in origin and that after thousands of years powerful fire entities from the planet’s core have nearly reached the surface. Can she convince the skeptical surface residents to flee and simultaneously divert the coming eruption? Thanks to a quick temper and rudimentary people skills shaped by her harsh early life, the first shapes up to be tougher than the second; fortunately, she has allies—notably Luvo, a deceptively small, stonelike being who is actually the ancient living heart of a mountain. Related in a strongly individual voice, expertly set in context without longwinded explanations and well-stocked with nuanced characters of several ages and species, this suspenseful tale is lit up with magic. (Fantasy. 10-14)