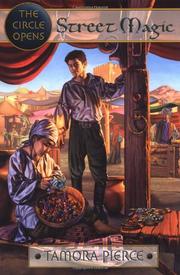 From the Circle Opens series, volume 2

Pierce (Magic Steps, 2000, etc.) continues to individually develop her quartet of adolescent mages. Former street rat Briar Moss, now 14 and a fully certified Mage, visits the distant city of Chammur with his mentor Rosethorn, in order to use their plant magic to replenish its depleted soil. While sightseeing, Briar discovers the homeless waif Evvy leaking stone magic. Reluctantly tutoring her in the control of her incipient powers, he becomes embroiled in a gang war, as the Vipers, prodded by a bored noblewoman, seek to profit by Evvy's talents. While retaining his most appealing traits—his affectionate bond with plant life, his jaundiced skepticism towards authority, and the prickly sarcasm disguising his deep love for his teacher and foster sisters—Briar also matures through the rewards and frustrations of teaching; and the threat to his protégé forces him to confront his romanticized ambivalence toward his own childhood gang. Strong-willed Evvy is a delightful addition to Pierce's mostly female cast, and the villainous Lady Zenadia oozes serpentine menace. Most fascinating is rose-red Chammur itself, with its timeworn stones, bustling bazaars, dusty rooftop roads, and cool, shaded palaces. Ancient, arid, elegant, sinister, sophisticated, weary, and cruel, Chammur drips with an exotic atmosphere clearly inspired by (if uncomfortably close to stereotyping) classical Arab culture. A must for Pierce's many fans, and a solid choice for those interested in a different take on gangs, faraway lands, or just good imaginative fantasy. (Fiction. 9-14)