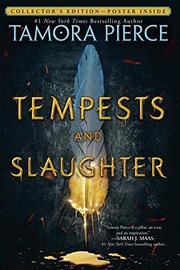 From the Numair Chronicles series, volume 1

Pierce’s new prequel series chronicles the beginnings of one of Tortall’s greatest mages.

At the Imperial University of Carthak, 10-year-old Arram (aka Numair Salmalín in later life) is brimming with power. When he accidentally floods a classroom with an unusually strong water spell, he is moved up to more advanced studies. He promptly makes two new friends, the charming Varice and the prince Ozorne. Pierce immerses readers in Arram’s day-to-day life as he ages, builds relationships with powerful mage instructors, encounters gods, and awakens to the brutality around him—especially as it relates to slavery. Sometimes lagging, the novel never comes to much of a climax, but Pierce slowly builds tension throughout for future conflict. As Arram comes into his power and Ozorne begins a dark ascent to the throne, their destinies become more tightly intertwined, for better or for worse. Hailing from different regions, Pierce’s characters are diverse (Arram is brown, and Varice and Ozorne are white). However, with his focus so deeply on his studies, Arram’s tunnel vision makes it difficult to gain a good understanding of the world beyond the university’s walls. Even as the theme of slavery is prominently woven throughout the novel, Arram’s scope of it is limited. But, with more to come in the series, there is still room for development.

Anyone can jump into the Numair Chronicles, but the novel will especially appeal to fans of the Tortall books