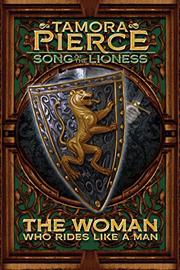 From the Song of the Lioness series, volume 3

Courage, skill, and magic are qualities that characterize 18-year-old Alanna in this third volume of the Song of the Lioness series. The tale (which can be enjoyed separately from the first two books) depicts Alanna's first year as a knight-errant for King Roald of Torvall, and combines the best charms of fantasy, adventure and romance. Alanna's adventures test not only her physical and spiritual qualities but her sense of identity and purpose. Alanna, her talking cat Faithful, her horse Moonlight, and teacher/ companion Coran meet the Bazhir desert tribesmen as the story begins. Finding themselves captive of the Bloody Hawk tribe, Alanna overcomes their leader's distrust through courage and luck. Alanna's defeat of the tribe's best fighter begins her exploits, which amaze and awe the Bazhirs. When she destroys her enemy, the tribe's evil holy man Ibn Nazzior, Alanna is asked to become their shaman. She challenges many of the tribe's customs and beliefs (especially those of sex roles) because of her independent action. As shaman, she trains two young outcast Bazhir women in their magical talents to become the first female tribal shamans. Alanna also fights the evil that enchants a crystal sword, which she won from a desert bandit in battle. The love Alanna feels for Prince Jonathon, who visits the tribe to learn its history, conflicts with her adventurous nature which craves action and recognition as a knight/soldier of the realm. Her attraction for George, the King of Thieves, brings her happiness, but another set of problems. Whom should she marry, Prince Jonathon or George? Alanna's world is a harsh one, but believable. Her uncertainties about her identity and her future are the ones that many young contemporary teens face. This fantasy provides food for introspection as well as flights of imagination into a magical kingdom. (Fantasy. 10-14)