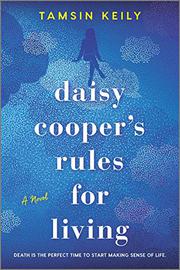 On a routine evening milk run, 23-year-old Londoner Daisy Cooper slips on the icy pavement, hits her head, and dies.

When Daisy follows the light, she wakes up in an office space that is more clinical than heavenly. There she meets Death, personified by a handsome man with mesmerizing green eyes and some bad news—there has been a clerical error. Daisy was not meant to die until the ripe old age of 92. Now stuck in limbo until further notice, Daisy kills time by taking on a job as Death’s assistant—where she is both a help and a hindrance—and spying on her boyfriend, Eric, and best friend, Violet, who is struggling with a resurgence in clinical depression following Daisy’s departure. As Daisy and Death process souls, including a murdered woman and plane crash victims, they form a special connection through exploring loss and its inescapable afteraffects—not only on the dead and those they leave behind, but on Death himself. These moments are obviously crafted to make the reader ruminate on their own mortality, but what could be emotionally manipulative or schmaltzy is surprisingly affecting in Keily’s hands. With the intriguing mystery of Daisy's is-she-isn't-she death, witty dialogue, and romantic tension, Keily hits all the right notes. But the book loses steam in the second half, becoming muddled by several drawn-out plot points and unnecessary scenes that do little to move the story forward. Is Daisy truly dead, or will she find a way to return to the living? Is Violet on her way to suffering a tragic setback? By Daisy’s third ill-advised attempt to reappear to her traumatized family and friends, it’s hard to keep caring either way.

A promising debut that gets bogged down by poor pacing and a too-neat ending.

THE AFTERLIFE OF HOLLY CHASE
by Cynthia Hand
Children

IT'S A WONDERFUL DEATH
by Sarah J. Schmitt
Newsletter sign-up