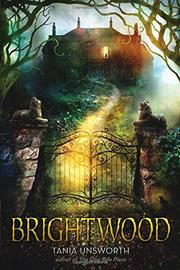 An intriguing mix of fantasy, mystery, and mental illness.

Home alone at Brightwood Hall, 11-year-old Daisy worries about her missing mother with each passing day. Her unease grows when a stranger arrives—a man who seems to want Brightwood all to himself. Despite her naiveté, readers will connect with Daisy and her dilemma. Bound to her home by agoraphobia and a sense of duty to protect Brightwood, Daisy seeks helps from the black-and-white specter of a girl named Frank. Brilliantly conceived by Unsworth, Frank is both a figment of Daisy’s imagination and the embodiment of Daisy’s cognitive development and character growth. Frank knows what Daisy knows and nothing more, but she forces Daisy to confront the truth about her situation. Brightwood seems like a magical place filled with wonder, animate objects, and talking animals, but as Daisy battles her fears and fights back against the man who wants Brightwood, she slowly comes to terms with the possibility that Brightwood is a place built on unresolved grief and mental illness. The book’s compassionate handling of sensitive subject matter is a trade-off for its tidy, uncomplicated ending, which doesn’t allow readers to see the healing process between two of the book’s major characters. Daisy is never described beyond her black hair, adding further ambiguity to the text.

Subtle and thought-provoking, the novel is entertaining and heartfelt as well as a gentle introduction to the world of mental illness.