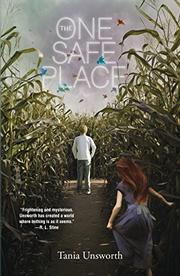 THE ONE SAFE PLACE

A group of orphans uncovers a sinister plot in this chilling and engrossing tale filled with detailed, sharply drawn characters.

Sometime in a future rife with climate crisis and brutal polarization of wealth, Devin buries his beloved grandfather and sets out to find someone to help him maintain the farm on which he’s grown up. In the city, he struggles to find enough food to live on until he meets a clever, street-wise girl named Kit. When Devin is invited by another boy to the Gabriel H. Penn Home for Childhood and insists that Kit be included too, the pair is initially delighted at the abundance of food and other comforts, but they rapidly begin to see that something terrible underpins the home. There are many familiar tropes here, the dystopian setting and the uncanny perfection of the orphanage among them. Yet Unsworth’s use of unadorned but vivid language—such as her description of Devin’s mind in a moment of panic being “battered by fear and confusion like a bird beating its wings against the bars of a cage”—is incredibly effective. Likewise, the straightforward third-person narration and the gradual resistance that builds among the children to the unique horrors at the home are convincingly well-paced.

A standout in the genre’s crowded landscape.