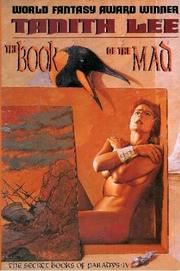 THE BOOK OF THE MAD

The Secret Books of Paradys IV

The culmination of Lee's horror-fantasy tetralogy (The Book of the Dead, 1992, etc.). The previous entries are composed of related stories, but this one, though elliptically structured, forms a novel in its own right. In the perpetually mist-shrouded, magical city of Paradise live the twins Felion and Smara, murderers who consider themselves the city's sole sane inhabitants. They hold the keys to a magic labyrinth of ice whose mercurial doorways give entry to an alternate city—scrubbed, bright, high-tech, laid-back Paradis. Here, hard-drinking visionary painter Leocardia's grand house and fortune were willed to her by the same mysterious uncle who bequeathed the labyrinth to Felion and Smara. A third city, Paradys, lies in Paradis's stark Victorian past; here, beautiful, impressionable adolescent Hilde falls for a narcissistic actor, is raped by him, suffers a breakdown, and is consigned to an asylum where the depraved attendants routinely torment the inmates. Slowly, logically, inevitably, the lives and fates of Felion and Smara, Leocardia, and Hilde converge, with astonishing consequences. Beautifully woven, with fascinating characters in a compelling narrative, brilliantly set forth in Lee's spare, firm, spiky prose. Sheer enchantment.