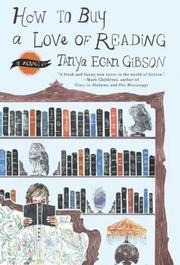 HOW TO BUY A LOVE OF READING

Debut novelist Gibson attempts to combine a snarky lampoon of super and nouveau riche cultural striving with a heartfelt coming-of-age story. She throws in a metafictional critique of metafiction for good measure.

In the Long Island, N.Y., town of Fox Glen, the wealthy, generally doltish residents vie to show how highbrow they are. So it’s not much of a stretch when a sweetly boorish bra-manufacturing magnate and his cartoonishly cold wife hire a writer to create a book for their daughter Carley’s sweet-sixteen party. The book will be a cultural coup. Besides, Carley’s teachers have complained about her lack of intellect, and Carley’s parents hope that involving her in the writing will prove motivating. Overweight Carley hates books and has few friends except Hunter—a big exception since he’s the most popular boy in the high school. A handsome if sickly lothario who drinks to serious excess when he isn’t reading or working on his application essay for Princeton, Hunter considers Carley his best friend and depends on her for all his platonic emotional needs. Her feelings are less platonic, and she repeatedly forgives him for behaving badly under the influence. Bree, the starving author of a novel, is hired to write Carley’s book, thanks to Justin, a famous writer living in Fox Glen seclusion since a fan attacked him. Justin knew Bree in college, treated her badly and has been secretly atoning every since. As Justin and Bree skirt around their relationship, they genuinely try to help Carley, but Carley cannot face that Hunter’s addiction to alcohol and drugs is becoming worse. The drunken scenes, the acting outs and the apologies repeat themselves in various forms until the reader loses track. Hunter’s downward spiral is offset by various witticisms surrounding Carley’s SAT vocabulary malapropisms; the excessively obnoxious behavior of various parents and rich friends; and Bree, Justin and Hunter’s literary debates.

Ambitious but unconvincing mix of uplift, tragedy and cartoonish satire.