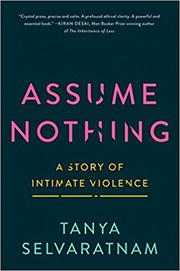 A writer and award-winning filmmaker’s account of how she fell into—and later escaped—an abusive relationship with the charismatic former attorney general of New York state.

When Selvaratnam met rising Democratic political star Eric Schneiderman in 2016, the attraction was immediate, and the texts and emails they exchanged in the weeks that followed became the prelude to a fairy-tale romance. At first, the author thought she had found a man whose transformational feminist values not only aligned with hers, but who seemed committed to defending the nation against what he knew would be Donald Trump’s inevitable “attacks on civil liberties and vulnerable communities.” However, the closer she became to Schneiderman, whose circle of acquaintances included Harvey Weinstein, the more he revealed his misogyny. An alcoholic who also combined Ambien and lorazepam, Schneiderman tried to control Selvaratnam and make himself the center of her life. His abuse also included nonconsensual, sexually sadistic behaviors such as spitting, slapping, choking, and calling her his “brown girl” slave. Terrified that “he and his people [would] try to crush me” if she spoke out, the author quietly confided in friends and her therapist. A domestic violence expert finally helped Selvaratnam, who struggled against crippling anxiety and memories of her father’s violence toward her mother, make a safe plan to leave. In the process, the author learned that the United States was “the tenth most dangerous place in the world for women” and discovered that many of Schneiderman’s associates knew about—and dismissed—his brutality. Selvaratnam then made the decision to go public with her story in the New Yorker, finding strength in the global chorus of voices that emerged as part of the #MeToo movement. Part survivor’s tale and part exposé of intimate violence, the book offers a candid, often frightening exploration of the diabolically schizophrenic ways that the patriarchy conspires to disempower women.

A courageous and compelling example of an author writing her “way out of the darkness.”