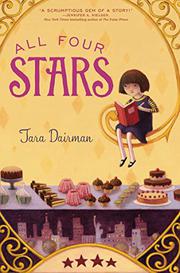 A preteen restaurant critic is born.

After being banned from cooking because she accidentally set the kitchen curtains on fire with a blowtorch—her parents really should have given her the minitorch she wanted for her birthday—a misdirected letter gets Gladys Gatsby, a girl with a serious passion for food, a freelance assignment reviewing a restaurant for the New York Standard. They don’t know she’s only 11. Plum assignment in hand, Gladys, who is too young to travel into the city by herself, has to figure out a way to get there, get into the restaurant and sample all the food on the menu without alerting her clueless-in-the-kitchen parents. Impossible? Maybe not, as Gladys turns out to be surprisingly canny and resourceful. The side effect of all this scheming is that it requires Gladys to find allies, a serendipitous event for this loner heroine, who by the end of the story has forged some real friendships. That aspect of the tale is warming, and Gladys’ psychological journey and personal transformation are solid and credible. Less so the plot machinations, which require a major suspension of belief, as do the portrayals of her oblivious parents and a clichéd queen bee.

This entertaining story about the joy of following one’s bliss is marred by some clunky plotting.