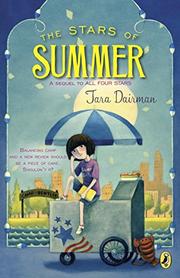 THE STARS OF SUMMER

A 12-year-old girl who freelances as a restaurant reviewer (her employer doesn't know her age) finds it increasingly difficult to keep her job secret from her parents while dealing with the problems of being a first-time camper and counselor-in-training.

In her first outing (All Four Stars, 2014), Gladys Gatsby, a dedicated cook and all-around foodie, landed her reviewing gig and made some friends. In this overlong, overpopulated sequel, the intrepid heroine has to keep lots of balls in the air. But once again, despite some awkward plot machinations and various substantial credibility problems, by the end, readers should be cheering for Gladys’ success. In this story, a somewhat more confident Gladys is put in a difficult fish-out-of-water situation: her friend Charissa, whose parents own Camp Bentley, gives the unathletic girl an unwanted present of an all-expenses-paid summer at camp. In addition to having to learn how to swim, Gladys must deal with Charissa and her buddies, an obnoxious child novelist, and the demanding camp cook, all while figuring out how to get into the city for her professional reviewing assignment—finding the best hot dog in New York City. It’s a testament to Gladys’ characterization that her appeal rises above the credulity-straining plot.

How Gladys rises to these and other challenges is the fun of the story, and despite the novel’s flaws, middle-grade girls should enjoy the ride.