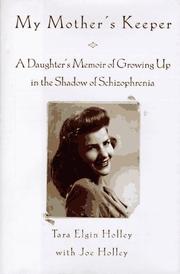 A Daughter's Memoir of Growing Up in the Shadow of Schizophrenia

The utterly absorbing story of a woman's struggle to care for her mentally ill mother, tracing the ravages of mental illness on both the sufferer and her family. Dawn Elgin, Holley's mother, a beautiful and gifted singer, was launching a career in Hollywood when she was suddenly struck down by schizophrenia in her early 20s. She was frequently hospitalized, and the author, then six years old, was sent to live with her caring, if authoritarian, great-aunt in Houston. Dawn's Christian Scientist parents and her sisters largely denied her illness; for her part, the author fantasized constantly about her mother. They were finally reunited when Holley was 11. While she hoped that Dawn would again be her glamorous old self, the reality of her mother's decline mocked such wishes: ``She wore what looked to me like baggy old-women's clothes, a bulky brown jacket and a shapeless dress . . . eyes lowered, she looked up now and then as if expecting someone to hit her.'' From adolescence on, through college, marriage (to a husband who at first knew almost nothing about mental illness), and the birth of two children, Holley struggled to find the best care for Dawn. Holley fought to keep relating to the human being, and the mother, underneath the disease that often made Dawn the prisoner of inner voices. She (and in an epilogue, her husband, a former editor of Texas Monthly) deftly teaches us a great deal about schizophrenia, particularly about the isolation, humiliation, and stigmatization the mentally ill still suffer. Yet this highly evocative, moving memoir is less about a terrible illness than it is about a highly unusual, in some ways tortured, but also tremendously strong, daughter-mother relationship. The bond is marked by ambivalence, conflict, suffering—and a daughter's impressive commitment to staying connected to, and caring for, a mother whom she has in some sense lost.