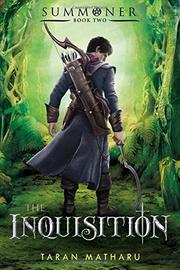 From the Summoner Trilogy series, volume 2

An underdog and his unlikely companions go to war in this sequel to The Novice (2015).

It’s been two years since Fletcher Wulf fled the village of Pelt and one year since he won the tournament at Vocans Academy only to end up imprisoned. Now on trial, 16-year-old Fletcher (pale of skin and dark of eyes and hair) confronts both his hometown foe, Didric, and academy rivals, and he sees the racial and class tensions dividing the land. Although a last-minute revelation frees Fletcher—and offers the orphan an origin story—Fletcher’s possible nobility wins no favor with gloating villains who surpass schoolyard bullying for serious violence. An Everykid hero, raised as a commoner but now magically gifted and martially trained, Fletcher reunites with friends dwarf Othello and elf Sylva and earns new allies. But the Hominum Empire is at war, so Fletcher and his friends—and enemies—fully armed and assisted by an expansive menagerie of animal-sidekick demons, embark on a mission behind orcish lines to sabotage their opponents, earning acclaim as their deeds are broadcast back home. Matharu offers a derivative story with continuous action and occasional gross-out humor; its worldbuilding is a cheerful mishmash of geography, chronology, and mythology blending guns, magic, and exoticized indigenous tropes. Given the last, its blunt message against injustice and prejudice feels a smidge ironic.

A fast-paced, familiar tale with strong echoes of Tolkien, Pullman, and Pokémon.