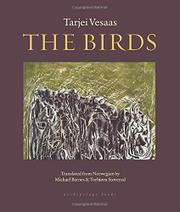 The point of view of a mentally simple man provides a poignant perspective on day-to-day events in this novel from Norway.

Vesaas (1897-1970; The Ice Palace, 1963) originally published this novel in 1957, but it has a freshness that can only be due to its timeless subject matter. Mattis, 37, lives with his sister Hege, 40, in a cottage in the woods. Gently mocked by villagers (who call him Simple Simon), Mattis clings to what sense he can make of things, often attributing miraculous significance to small events such as the flight of a woodcock over his house. He eagerly tells anyone who will listen, most often Hege, about the small moments that have filled him with overwhelming feeling. Life is full of drama for him, but we see through his eyes (and clever, subtle narration) that his sister is miserable, feeling trapped in drudgery. She knits sweaters for a living and soon asks Mattis to go look for some work. Thus begin several adventures for Mattis, which include becoming an impromptu ferryman for two attractive girls who are unexpectedly gentle with him, allowing him to carry them to shore in town so he can impress the villagers. Each turn of events prompts an elaborate sense of wonder and optimism in Mattis. The tension between him and the unhappy Hege works well as a form of suspense, as Mattis fears she will get fed up and leave him, and the reader wonders the same thing. But just as their duo seems stalled in unhappy stasis, Mattis happens to ferry home a lumberjack, Jørgen, who becomes Hege's love interest. Some of the novel's exquisite control slackens in the last section, as Jørgen's actions are surprisingly predictable (however contradictory that seems), and Hege's rescue from loneliness has a “too good to be true” feeling. Nothing is truly smooth, however, which is a sadness built into every page of a story about a character like Mattis. And despite lulls, the novel is compelling enough to pull you along to the very end.

From the first page, this novel grips us with an acutely sensitive rendition of a mentally handicapped man's inner world.