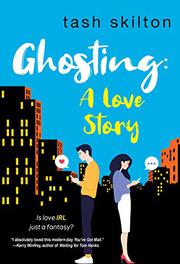 Cyrano de Bergerac meets classic rom-com banter in this contemporary romp about the highs and lows of modern dating.

Miles Ibrahim is possibly at the lowest point in his life: His engagement is over, his ex-fiancee announced a surprise pregnancy, he’s forced to crash on a friend’s couch, and his freelancing gig of playing ghostwriter for online dating profiles is in jeopardy. To add insult to injury, Miles now has competition for the free day-old biscotti and large window seat at one of his favorite cafes in New York. Miles’ cafe interloper is Zoey Abot, recent transplant from California. Though both Miles and Zoey get off on the wrong foot, they have way more in common than they realize. They’re affected by the loss of trust from loved ones. They are firmly in the camp of “starving artist” as they scrounge and scrimp to afford rent and food in the Big Apple. They’re also both secretly wooing one another as dating profile ghostwriters for other people. Both Miles and Zoey are complex and lively characters who sizzle and spark when together, and getting to know their adorable family members is an added, heartwarming bonus. Miles’ parents are a Muslim and Jewish couple, and they adore their son to bits. Meanwhile, Zoey is still dealing with abandonment issues from her parents, who met in the Philippines while doing disaster relief; thankfully, she has a lovely best friend who is also her grandma. At times, the romantic pacing gets bogged down in the details of Miles' and Zoey’s larger social circles, like Zoey’s definitely racist boss, Clifford, and the persnickety boyfriend of Miles’ best friend. For those feeling the lack of romantic comedies on the screen, this book will undoubtedly scratch that itch with its excellent banter, secret personas, and slow-burn attraction between a hero and heroine vying for a table big enough to put down their laptops.

An energetic romance that would make Nora Ephron proud.