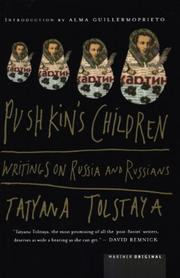 Writings on Russia and Russians

Critical pieces (most for the New York Review of Books) that add up to a highly opinionated, irony-laced view of life and art in Soviet and post-Soviet Russia.

Born in 1951, fiction-writer Tolstaya (Sleepwalker in a Fog, 1992, etc.) bears a distinguished pedigree: her grandfather was the Stalin-era novelist Alexei Tolstoy, while another forebear was the Tolstoy of War and Peace fame. This exalted lineage afforded her and her family a degree of protection from the irrationalities, often murderous, of Soviet politics, about which she has much to say in these pages. Reviewing Robert Conquest’s The Great Terror, for instance, she remarks that Lenin hated the intelligentsia more than any other class, “and they were the first to be slaughtered,” precisely, she suggests, because they had a conscience and “were not indifferent to issues of social good”; strange it is, then, that so many intellectuals should esteem Lenin to this day. Assessing Gail Sheehy’s wide-eyed biography of Mikhail Gorbachev, she wryly notes that it does no good to wonder why Gorbachev should have told his people that he was a dedicated Communist while telling Margaret Thatcher that he was no longer one of the faithful, for such duplicity is of a piece with the Soviet pattern of rule, and no Russian would bat an eye on hearing of it. (Of Sheehy, she writes, perhaps unkindly, “There is not a trace of critical attitude toward her material.”) Writing of Boris Yeltsin’s time as president of Russia, during which the Western press was given to tongue-clucking over Yeltsin’s drinking and other moral failures, she reckons that it’s a good thing that “scandals of the Gary Hart–like variety leave us indifferent,” for had Yeltsin not thwarted the coup attempt of 1991, “Gorbachev would be dead, the cold war would be revived, Eastern Europe would be stained with blood, and Russian tanks would be in Berlin.” (And in any event, she adds, “a real Russian is always thinking about vodka.”) And so on, in acidic and always intelligent prose.

Of much interest to Russia hands, as well as admirers of Tolstaya’s fiction.