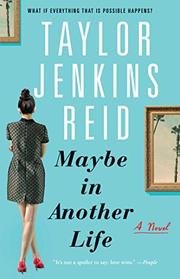 MAYBE IN ANOTHER LIFE

Reid’s latest (After I Do, 2014, etc.) explores two parallel universes in which a young woman hopes to find her soul mate and change her life for the better.

After ending an affair with a married man, Hannah Martin is reunited with her high school sweetheart, Ethan, at a bar in Los Angeles. Should she go home with her friends and catch up with him later, or should they stay out and have another drink? It doesn’t seem like either decision would have earth-shattering consequences, but Reid has a knack for finding skeletons in unexpected closets. Two vastly different scenarios play out in alternating chapters: in one, Hannah and Ethan reconnect as if no time has passed; in the other, Hannah lands in the hospital alone after a freak accident that marks the first of many surprising plot twists. Hannah’s best friend, Gabby, believes in soul mates, and though Hannah has trouble making decisions—even when picking a snack from a vending machine—she and Gabby discover how their belief systems can alter their world as much as their choices. “Believing in fate is like living on cruise control,” Hannah says. What follows is a thoughtful analysis of free will versus fate in which Hannah finds that disasters can bring unexpected blessings, blessings can bring unexpected disasters, and that most people are willing to bring Hannah her favorite cinnamon rolls. “Because even when it looks like she’s made a terrible mistake,” Hannah’s mother observes, “things will always work out for Hannah.” The larger question becomes whether Hannah’s choices will ultimately affect her happiness—and it’s one that’s answered on a hopeful note as Hannah tries to do the right thing in every situation she faces.

Entertaining and unpredictable; Reid makes a compelling argument for happiness in every life.