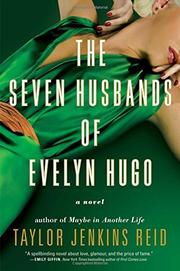 THE SEVEN HUSBANDS OF EVELYN HUGO

An aging starlet with seven marriages behind her generously offers the rights to her memoir to an inexperienced writer—at a heartbreaking cost.

Monique Grant is stunned when Hollywood legend Evelyn Hugo grants an exclusive interview to her over more seasoned journalists, but when she’s also chosen to publish Evelyn’s final confessions after her death, she learns that the 79-year-old actress has enough life experience for them both. Growing up poor in Hell’s Kitchen, young Evelyn Herrera trades her virginity for a ride to Hollywood, changes her name, and climbs the rungs of the entertainment-industry ladder one husband at a time until she hits Oscar gold. To write her off as being calculating and fickle would leave out the difficulty of being a woman, especially a woman of color, trying to get by in the late 1950s without a man’s blessing. Evelyn plays up her bombshell figure and hides her Cuban roots by dying her hair blonde—the first of many lies she’ll have to tell over the course of her life to prove to the world that she deserves her place in the spotlight. She’s unapologetically ambitious but not without remorse. Which of her seven husbands was her true love? Why did she choose Monique to tell her story? Evelyn recounts her failures and triumphs in chronological order, one husband at a time, with a few breaks for Monique to report back to her editor. The celebrity tell-all style is a departure from Reid’s (One True Loves, 2016, etc.) previous books, but Evelyn Hugo is a character who can demand top billing. When asked if it bothers her that “all anyone talks about when they talk about you are the seven husbands of Evelyn Hugo,” she says no: “Because they are just husbands. I am Evelyn Hugo.”

Reid's heroine reveals her darkest secrets as if she were wiping off makeup at the end of the night—a celebration of human frailty that speaks to the Marilyn Monroe and Elizabeth Taylor in us all.