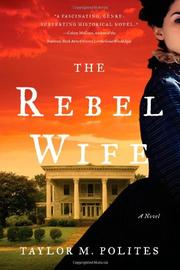 Widowed in postwar Alabama, with fever raging and no one to trust but a freed slave, Augusta (Gus) Branson needs to find her future, in this heavily atmospheric Southern gothic.

Brooding resentment and ineradicable racism thicken the already sweltering air of Polites’ debut, a tableau of the post–Civil War South featuring the town of Albion, where Yankee-supporting Eli Branson, Gus’ husband, is the first to succumb to a blood-draining—and symbolic—fever. After a materially comfortable 10-year marriage, forced on Gus by her mother, she learns from the trustee of Eli’s will, Judge Heppert, that Eli was steeped in debt and there is no money, which contradicts the whispered comments of Simon, an ex-slave used by Eli to deliver political bribes. Passive Gus, her torpor deepened with laudanum, has few allies: not Judge or his ex-suitor son, nor her caricature wastrel brother Mike. Instead, increasingly she relies on Simon and the other freed slaves. Polites draws a detailed portrait of post-war politics and sentiments, with the blacks heading for a better life in Kansas and long-term bigots heading up the merciless Knights of the White Cross. As for plot, progress is leaden until the final apocalyptic sequence of violence, revenge and just desserts.