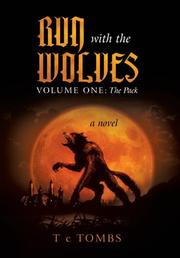 RUN WITH THE WOLVES

Volume One: The Pack

In 15th-century Europe, war looms and monstrous wolves and other beasts roam the night.

The year is 1461, and neighboring countries Skoland and Medinia seem to brokering an uneasy truce after generations of war. Not all are happy about this development, however. Leaders and peasants on both sides have a difficult time trusting that there will be peace, especially after a series of brutal attacks in the countryside leave both sides suspecting the other. Willie, a young serf, is dragged into the conflict directly when he attempts to save the animals on his farm from a pack of creatures with characteristics of both man and wolf, which possess inhuman strength and speed. He’s bitten but survives. As a result, the Pack takes him to nearby Varakov, where this group of wolfmen lives under the protection of the mysterious Lord Victor, who may not be completely human either. Willie hates the Pack and all associated with them, but he soon learns that everything is more complicated than he once believed; he must decide for himself whom he can trust and whom he cannot. While this is mostly Willie’s tale, the rest of the cast is granted complex personalities, allowing the reader to decide, like Willie, who can be believed. Similarly, there is a wonderful exchange between fantasy and historical fiction here, as the countries of Skoland, Medinia and Varakov have their histories firmly based in the true medieval history of Europe, while leaving room for fantasy in the narratives of the Pack and their brethren. Two books follow this one, and they each promise to add more to this excellent world.