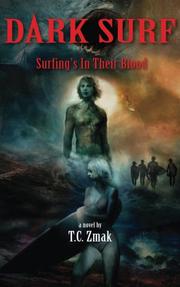 From the Dark Surf series, volume 1

Zmak sets a vampire romance in the California beach community in this offbeat debut new-adult thriller.

When surfer Cody Hansen is killed in an apparent shark attack, it sends his best friend, Jake Ryder, spiraling. How could this have happened? Shark attacks are very uncommon, particularly on the California coast. As Jake seeks out another surfer—the last person to see Cody alive—to learn the truth about what happened, his quest leads him into dangerous waters. But it turns out that he’s not alone in his investigation. The story gives the reader a variety of perspectives on that tragic night in short, sharp, and occasionally brutal chapters. What’s more, the prose, while pithy, manages to give unique voices to characters with vastly different life experiences, providing the novel with a sense of depth. Among these characters is Lani Marley, a vacationing FBI agent looking into a rise in lethal, unpredictable shark attacks, which coincides with the movements of a surfer group called the Nomads. Both Jake and Lani find themselves drawn into the Nomads’ web; Jake, by the jealous, beautiful Skylar and Lani, by the Nomads’ darkly charismatic leader, Tristan. It turns out that the carefree night surfers are actually a cabal of shape-shifting vampires. As the romances between the Nomads and the outsiders intensify, all of their lives are threatened by the Nomads’ enemies and the cabal’s own bloody sense of justice. For the most part, the story flows quickly and smoothly. It sometimes takes abrupt turns, though, as in flashbacks to Tristan’s vampiric origins, his and Skylar’s first transformations, and the beginnings of the Nomads. At the same time, the story provides genuine depictions of the joy the characters take in surfing and the sea and the tribulations of love, guilt, and loyalty. It’s all passionate, fun, and delightfully new.

An entertaining and emotional novel in which blood is thicker than salt water.