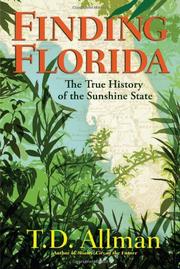 A rich and lively history of Florida, minus the Disney gloss.

“To find the real Florida you…must tear up the picture postcards! Get rid of the plumed conquistadors and Confederate cavaliers!” writes veteran journalist and native Floridian Allman (Rogue State: America at War with the World, 2004, etc.). In this colorful, sometimes angry account, he shatters five centuries of mythmaking to tell the real story of a soggy, inhospitable place with few resources, whose most memorable events are often fabrications and whose real history has been hidden by boosters and historians. Ponce de León did not discover Florida. Nor was he searching for the legendary Fountain of Youth, popularized by Washington Irving. But the courtier Pedro Menéndez de Avilés, since airbrushed out of history, did secure Florida for Spain in 1565, slaughtering Frenchmen near St. Augustine. In 1816, on Gen. Andrew Jackson’s orders, Americans committed “one of the worst massacres in American history,” killing hundreds of civilians in the Indian, black, and mixed-race community known as Negro Fort, now the Fort Gadsden Historic Recreation Center. A turning point in the U.S. acquisition of Florida, the massacre was followed by years of inhumane policies toward Indians and blacks. The author lambasts the work of historians who have whitewashed Florida’s unseemly moments in the apparent belief that people do not like to be reminded of unpleasant things. Much of his gripping narrative focuses on key figures like Seminole resistance leader Osceola, who later became a celebrity Indian chief; industrialist Henry Flagler, one of the indefatigable promoters who made waterlogged land seem like real estate; and go-getter Walter P. Fraser, who turned St. Augustine into a travel destination and precursor of Florida theme parks.

A splendid rendering of the messy human story of our fourth-most populous state.