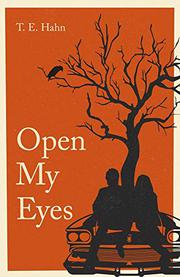 A young man struggles to articulate his chaotic but numbed feelings in this debut novel.

Seventeen-year-old Eddie falls headlong for Elizabeth, a freshman who plays in the school band with him. As they begin dating and grow closer, he’s as awkward and self-conscious as he is earnest about his first relationship: “In the beginning was Elizabeth, and Elizabeth was in light, and Elizabeth was light.” However, it turns out that circumstances have effectively blurred the line between fantasy and reality for Eddie; his father died years ago, and to this day, the young man addresses his thoughts to the void where his dad should be. His mother responds to the loss by clinging to Eddie in ways that slowly become sinister. And since the fateful car accident, he’s been put on mind-altering medication for unspecified reasons, which causes him to lurch through life in a physical, mental, and emotional fog: He assumed the medication was punishment for his disobedience, he explains, “the longest punishment in childhood history.” However, Elizabeth cuts through his detachment, shining in his memories like a divine being. Yet the significance of her presence in his life raises the stakes of their relationship in untenable ways. Typical hurdles, such as uncomfortable meet-the-parents dinners, assume a mythical awfulness in Eddie’s fragmented neuroses and visions, and he can barely enjoy his newfound happiness under the looming fear that he’ll somehow taint or pollute it. Hahn writes in a clipped, frenetic manner that effectively conveys his narrator’s mental state. Recurring images of snow, fire, and blood give the book religious overtones that feel almost medieval despite Eddie’s refusal to attend church with his mother. Other symbols crowd the story but in a manner that rarely feels heavy-handed; in a particularly engaging scene, for example, Eddie and Elizabeth argue as they watch an inflatable fun house collapse on a group of screaming children. Collectively, the author’s choices create a satisfying sensory experience as the protagonist seeks a real and present version of himself.