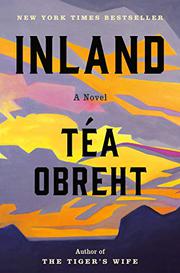 A frontier tale dazzles with camels and wolves and two characters who never quite meet.

Eight years after Obreht’s sensational debut, The Tiger’s Wife (2011), she returns with a novel saturated in enough realism and magic to make the ghost of Gabriel García Márquez grin. She keeps her penchant for animals and the dead but switches up centuries and continents. Having won an Orange Prize for The Tiger’s Wife, a mesmerizing 20th-century Balkan folktale, Obreht cuts her new story from a mythmaking swatch of the Arizona Territory in 1893. The book alternates between the narratives of two complex, beset protagonists: Lurie, an orphan and outcast who killed a boy, and Nora, a prickly frontierswoman with her own guilty conscience. Both speak to the dead. Lurie sees ghosts from early childhood and acquires their “wants,” while Nora keeps up a running conversation with her daughter, Evelyn, dead of heatstroke as a baby but aging into a fine young woman in her mother’s mind. Obreht throws readers into the swift river of her imagination—it takes a while to realize that Lurie is addressing all his remarks to a camel. The land is gripped by terrible drought. As Nora’s homestead desiccates, her husband leaves in search of water, and her older sons bolt after an explosive dispute. An indignant local drunk wonders whether “anybody else in this town [had] read an almanac or history in their lives? What were they all doing here, watching the sky, farming rock and dust?” Still, a deep stoicism, flinty humor, and awe at the natural world pervade these characters. They are both treacherous and good company. Here is Nora, hyperaware of a man who’s not her husband: “Foremost on her mind: the flimsiness of her unlaundered shirt and the weight of her boots.” Lurie, hiding among the U.S. Army’s camel cavaliers (you can look them up), is dogged down the years by Arkansas Marshal John Berger. Their encounters mystify both men. Meanwhile, there are head lice, marvelous, dueling newspaper editorials, and a mute granny with her part to play.

The final, luminous chapter is six pages that will take your breath away.