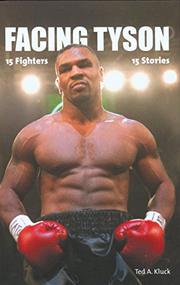 by Ted A. Kluck

Current and retired boxers tell tales of stepping into the ring with “Iron Mike.”

At one time, there was no man more feared—and perhaps no athlete more popular—on the planet. With his unrivaled combination of speed and power, Mike Tyson escaped poverty and become a multimillionaire, appealing to even the most disinterested and jaded fans in the process. Tyson’s world came crashing down, however, when he was convicted of rape and sent to prison in 1992. After being released, his outrageous antics and questionable financial decisions turned him into more of a punch line than a puncher. Boxing journalist Kluck attempts to provide insight into the cultural icon Tyson was and the man he has become, through interviews with a number of his opponents, including Mitch “Blood” Green, James “Bonecrusher” Smith and Evander Holyfield, who famously had part of his ear bitten off by Tyson in a 1997 bout. The author had more than a little difficulty persuading some of his subjects to agree to interviews that would net them nothing in return. He also had trouble tracking many of them down, as several are doing time in prison or have squandered their fortunes on drugs and sex. While some fighters provide honest commentary on the former champ, few know him well enough to offer anything more insightful than the fact that he seemed like a nice guy or that they felt sorry for him. Tyson remains an enigma, but what becomes distressingly clear is the way boxing uses promising young men for profit, then spits them out when they begin to fade.

Delivers some wake-up shots to the boxing community.