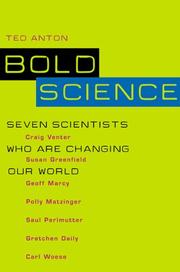 Seven Scientists Who Are Changing Our World

Engaging profiles of seven scientists who took part in the breakthroughs of the 1990s.

Within a few years, researchers will identify each of the millions of units in the human genome. Much of the credit for that accomplishment must go to geneticist Craig Venter, who assembled the technology to sequence 25 genes per day—a spectacular improvement over the tedious lab work that preceded it. Astronomer Geoffrey Marcy led a pioneering team to an unpractical but utterly fascinating breakthrough: they discovered planets circling other stars. Brain research also entered a golden age in the 1990s, and Susan Greenfield was able to propose ingenious new theories to explain consciousness, the greatest mystery of brain function. Measuring light from unimaginably distant stars, Saul Perlmutter helped trigger a revolution in cosmology. It turns out that the expansion of the universe is accelerating, and the force driving this acceleration represents most of the energy in the universe. No one knows what it is. The 1990s saw another authentic revolution, this one in biology: Carl Woese discovered an entirely new kingdom, the archaebacteria. Bizarre microorganisms, they were probably the first living things on earth. Anton (Eros, Magic, and the Murder of Professor Culianu, 1996) has done his homework. He knows that few prominent scientists nowadays fit the noble humanitarian mold of Jonas Salk or act the bashful genius like Einstein. Today they must perform on Oprah and talk in 30-second soundbites. Anton’s scientists are no shrinking violets: two are entrepreneurs, most are politically astute, and some are media stars. Since Anton writes from hindsight, their struggles end in success. Their opponents have their say but come across as wrong-headed and not very nice. This approach contravenes Stephen Jay Gould’s first principle of scientific controversy: those who are wrong are not more stupid or even less perceptive than those who are right. This seems paradoxical and most popular writers don’t subscribe to it.

Yet Anton’s profiles ring true, and readers will enjoy learning of their triumphs.