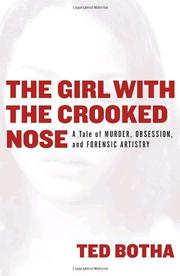 THE GIRL WITH THE CROOKED NOSE

A Tale of Murder, Obsession, and Forensic Artistry

The real-life saga of Frank Bender, who unexpectedly rode a commercial photography career to a parallel gig reconstructing the faces of unidentified murder victims and suspects.

Now in his mid-60s, Bender calls Philadelphia home, yet his work with clay and other materials on behalf of law-enforcement agencies has taken him to dozens of locales. Botha (Mongo: Adventures in Trash, 2004, etc.) cuts back and forth between Philadelphia, where Bender labors in his studio, and the Mexican state of Chihuahua, across the border from El Paso, Texas, where Bender is helping police identify dozens of the young women murdered year after year dating back to 1993. The chronology jumps around, with 1977 serving as one of the key years. New at ceramics and collaborating with Philadelphia medical examiners, the self-taught, intuitive Bender almost immediately helped solve the cold case of an unidentified murdered woman who turned out to be Anna Duval. Bender’s painted clay cast, photographed and distributed to law-enforcement agencies, caught the attention of a New Jersey policeman who realized it looked like the picture of a former Philadelphia-area resident who had moved to Arizona, then went missing. Early success gave Bender confidence to continue his new occupation, and law-enforcement agencies reason to seek him out. Although the book fits into the true-crime genre, it is as much a biography of Bender. Botha examines his marriage and extramarital affairs, his fathering skills, his friendships and his financial ups-and-downs in addition to documenting cases solved, cases unsolved and the arcane techniques of facial reconstruction.

Readers given to queasiness may find the gory details excessive, but fans of crime-solving procedurals will love it.