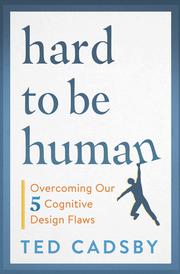 HARD TO BE HUMAN

Writer and speaker Cadsby’s treatise asserts that the very traits that set humans apart from animals also cause existential and behavioral disadvantages.

The author defines five “cognitive design features” of the human brain, which he says is optimized for the primal living conditions of our hunter-gatherer ancestors. These features, which include “We’re Greedy Reductionists” and “We’re Addicted to Certainty,” become flaws in the sociocultural context of 21st-century living. He expertly outlines why humans possess these reflexive, instinctive responses to stimuli and provides actionable tips and exercises for overcoming them by embracing what he calls “The Space Between”—a self-generated mental area that separates the knee-jerk “System 1” from his proposed metacognitive powerhouse, “System 2.” Cadsby notes the Buddhist notion that the human experience is predicated on suffering but asserts that “our ultimate freedom lies in our metacogni­tive ability to pause and reflect before we respond.” In these pages, he walks readers through the System 1 defaults, offering a mix of simple, concrete solutions and more labor-intensive mental exercises to help overcome them; the latter range from taking deep breaths to restructuring the way one approaches difficult decisions to ultimately redefining one’s search for meaning: “We are not designed to live free of existential anxiety,” he states, because, despite ourselves, “we are the species that ruminates, causing us no end of uniquely human suffering.” The book effectively doubles as a crash-course in philosophy, delving generally into the ideas of such foundational thinkers as Friedrich Nietzsche, Arthur Schopenhauer, Carl Jung, Daniel Kahneman, and Steven Pinker. Cadsby does an excellent job summarizing and making connections between interrelated philosophies and subsequently grounding his own assertions on these theories to construct a consistent and cohesive game plan. Although his conclusions and techniques may not be new, his presentation is creative and informative, restructuring classic ideas into accessible advice.

A useful and highly readable book of self-discipline and reflection.