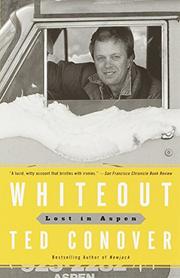 Conover, who wrote so well about the low life in Roiling Nowhere (1983: railroad tramps) and Coyotes (1987: migrant workers), now spiritedly chronicles the high life--8000 feet above sea level and worlds above plebeian reality in the glittering ""paradise"" of Aspen. Neither well-known like Jack Nicholson, George Hamilton, Goldie Hawn, or the many other celebs he brushes shoulders with in his roughly chronological (late 1980's) account, nor wealthy like the CEOs and scions who have made tiny Aspen into a resort town with ""more million-dollar houses than Denver,"" Conover chooses the perch of an ""official voyeur"" from which to spy on Aspen life--as a cabdriver. His details of cabbie procedures (e.g., notes on cabbie lingo) drag a bit, but what he sees from his driver's seat, often acting as a delivery boy, shines--from the movie mogul who calls up in the middle of the night for some chocolate-chip cookies to Hunter Thompson calling up for some booze (""his rarefied appearance, virtual unintelligibility, and jerking manner made you wonder whether he was an imbecile or a genius""). As Conover makes his good-humored, wide-eyed way around town, partying (crashing a star-studded bash hosted by Don Johnson), soaking up Aspen history (neatly nutshelled here), interviewing the famous (including an over-the-hill John Denver), eventually changing jobs (to a post on The Aspen Times), he touches on Aspen's darker side, particularly in a grim account of the recovery of the body of a skier killed by an avalanche. It's the moneyed excess of Aspen life, though, that tugs at his soul, until, by book's end, he finds himself judging a beloved old Denver restaurant as ""very grey and middle-class. There was no glamour around for miles."" A bit scattered and not as smooth as Coyotes--as Conover hops and comments here, there, everywhere--but full of flashes of insight and plenty of fun to read for the many enticing tales of the rich and famous.