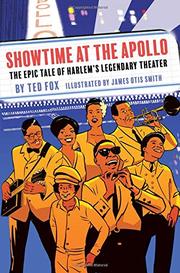 SHOWTIME AT THE APOLLO

This graphic treatment adds a new dimension to a music book that was already hailed as a classic.

Most graphic adaptations aim to reach new generations of readers with a work that is flashier but less substantial than the original. This collaboration between Fox (In the Groove: The People Behind the Music, 1986, etc.) and illustrator Smith represents a new experience for readers, one with an immediacy and vitality that text alone might never approach. Fox’s original was published to wide acclaim in 1983; that book illuminated the significance of the Apollo to musicians and to the Harlem community, detailing how it got to be where it was and celebrating the legacy that lives on. The current project gives Fox the opportunity to update the original and to show how, in the subsequent 35 years, the venue has expanded its offerings, hosting the likes of Chris Rock and Bruce Springsteen and a memorial service for James Brown. The narrative brings readers behind the scenes to the real show backstage and to the hotel rooms where the young reporter conducted his interviews. It also highlights the visual performing styles of some of the most galvanic artists in the history of popular music. Performers who were then unknown and were launched as winners of the Apollo’s Amateur Night competition include Ella Fitzgerald, Billie Holiday, James Brown, Jimi Hendrix, Luther Vandross, and Michael Jackson. Fox and Smith effectively present the progression of entertainment styles from swing and tap dance through bebop, gospel and blues, rhythm & blues, soul, and rock. They provide an entertaining, lively narrative with profiles that match the spirit, drawings that seem as musical as the music described within the text.

The renewal of spirit through this striking collaboration reflects the way the Apollo has renewed itself through the decades.