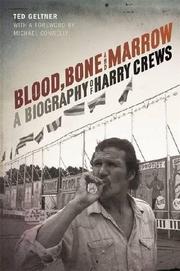 A Biography of Harry Crews

In 1979, Harry Crews (1935-2012) stumbled drunkenly through a reading at the University of South Florida. “What did it take to be a real novelist?” an audience member shouted out. Defiantly, Crews shouted back: “Blood!...Bone!...Marrow!” He might well have added: sweat, tears, and alcohol. Geltner (Journalism/Valdosta State Univ.; Last King of the Sport Page: The Life and Career of Jim Murray, 2012) draws on interviews with Crews, his colleagues, students, drinking buddies, and ex-wife and on Crews’ fiction, memoirs, and nonfiction to produce a candid, sympathetic life of a wounded, self-destructive man. Born in rural Georgia to a family struck hard by the Great Depression, Crews’ childhood was “filled with violence and pain and hideously damaged people” and “replete with disease and alienation and indescribable suffering.” At 5, he contracted polio. Although doctors said he would never walk again, he ended up with only a limp. A few months later, he fell into a pot of scalding water, resulting in burns over two-thirds of his body. “At least in terms of physical agony,” Geltner observes, “Harry’s life had bottomed out early.” Crews later escaped by joining the Marines; he married, had two sons, earned a college degree, and took a teaching job at the University of Florida, all the while determined to be a writer. His first novel, The Gospel Singer (1968), won critical praise for its “nice wild flavor,” and some compared him to Faulkner and Hemingway. Prestigious houses vied for his work, and he published eight novels in eight years, got assignments from top-level magazines (Playboy, Esquire), and won a string of awards. But demons overcame him: Geltner calls him a functioning alcoholic, except when he was not. One year, he had 16 stays in rehab clinics. His classes—when he was sober enough to appear—were “tension- and testosterone-filled environments.”

An absorbing but sad chronicle of a tormented writer.