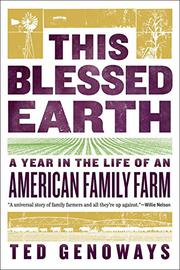 A Year in the Life of an American Family Farm

Journalist Genoways (The Chain: Farm, Factory, and the Fate of Our Food, 2014, etc.) returns to further study farming in America.

The author’s latest book is quieter and more meditative, as he chronicles his immersion in the seasons of a Nebraska family trying to survive on their family acres. Some of the mood conveyed by the up-close narrative reflects the quietness of desperation, as unpredictable weather, international market fluctuations, the changing practices of seed suppliers, the availability of water for irrigation, and government agricultural supports conspire to create greater-than-usual questions about whether patriarch Rick Hammond, his daughter, Meghan Hammond, and her husband, Kyle Galloway, can pay their bills in rural Nebraska. Genoways is a Nebraskan but did not grow up on a farm. He is a master at portraying the unique qualities of this Midwestern state but a novice about the intricacies of earning a living as a family farmer. Rick, Meghan, and Kyle exhibited remarkable patience schooling the author, allowing him to participate in their activities and record their thoughts over the months. Most of the book focuses on the farming of corn and soybeans, but Genoways also devotes interludes to the very different pursuit of raising beef cattle. The narrative is more or less chronological, following the seasons, but the author occasionally diverges to explore the characters of his protagonists and of farmers in general. For example, Rick can be generous to a fault with fellow farmers yet simultaneously competitive about crop growth—in this zero-sum game, every neighbor who sells higher might mean Rick selling slightly lower. Meghan’s back story is especially fascinating, as the author chronicles why she intended to leave farming but ended up pulled back in to the profession.