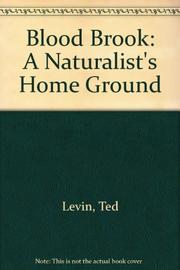 Low-key nature observations presented with grace by naturalist, wildlife photographer, and free-lance journalist Levin. As a child, Levin believed in God, the Yankees, and nature. Now only nature remains, although the author often couches his devotion to it in religious terms: ``Like Abraham, who made a covenant with God, I must make a covenant with the land.'' This Levin does from his own backyard, a hill one hundred yards above Blood Brook, a ``humble stream'' in which he sees ``the whole of North American embodied.'' He tracks down the brook's headwaters, ``mere puddles in the springy soil,'' and observes the creatures- -sculpin, muskrat, whirligigs, brook trout—that roil its waters. He imagines the wooly mammoth, giant sloth, and mastodon that wandered his hill during the last ice age. He clambers up Mt. Washington, traces the life cycle of tadpoles, cowers as a snapping turtle invades his car, deciphers the secrets hidden in road kills (``three dark spots on the paved road: two dimensional baby turtles, flattened by traffic. Some turtles, at last, had hatched''). Mowing his lawn becomes a lesson in the ways of grasshoppers and crickets. A ``minor spider fanatic''—he seems quite happy feeding a moth to a voracious six-legged monster—Levin recalls spider terror as a boy on Long Island. He studies Dutch elm disease and pileated woodpeckers, tracks down Vermont's remaining rattlesnakes, explains why sugar maples blaze into color every autumn. At the end, unexpectedly, things slip badly, as Levin dons a prophet's cloak to attack Hydro-Quebec (Quebec's public electric utility) with a string of pious eco-think platitudes. Much like the author's patch of Vermont: small, earthy, with a gentle, rolling style. Just ease off on the cracker-barrel kibitzing.