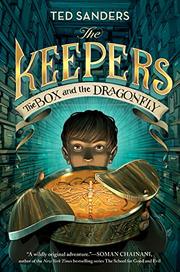 THE BOX AND THE DRAGONFLY

From the Keepers series, volume 1

In this series opener, the fate of humankind rests in the hands of a mostly pragmatic boy, a sometimes-invisible girl and the magical archives of two secret sects.

Twelve-year-old Horace F. Andrews is both curious and logical. On his quotidian commute home, a previously unseen storefront called the House of Answers ignites his inquisitive tendencies. The discovery of the shop coincides with meeting a creepy man who is more insect than human and a spitfire, self-assured 12-year-old girl, Chloe, who appears out of—and disappears into—nowhere. The House proves to be a curated collection of magical objects—Tan’ji—linked to “keepers.” Chloe is one such, and Horace becomes another when he’s linked to the Box of Promises. Only in the hand of a keeper can the Tan’ji’s power be fully realized, so it’s up to Horace, Chloe and a small group of keepers to keep it from villains of the more-insect-than-human variety. Though set in contemporary Chicago, the story has a from-another-era charm. A sizable novel, its length alone is geared toward future Throners but shouldn’t deter readers accustomed to a lighter load. The touching message of self-discovery is sometimes too blatant (“I want to see you continuing to become the person I know you are”), but this doesn’t unduly mar the overall narrative.

An epic adventure of self-discovery, magic, tragedy and blurred lines of loyalty for middle-grade lovers of fantasy.