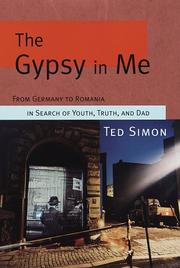 THE GYPSY IN ME

From Germany to Romania in Search of Youth, Truth, and Dad

In this affecting travel memoir, Simon (The River Stops Here, 1994) pursues both a component of his own history and a vision of post-Soviet eastern Europe circa 1994. A Californian reared in wartime England, Simon decided to check out eastern Europe, the one area of the world he had not traveled. (He wrote about his global curcuit by motorcycle in the widely translated Jupiter's Travels, 1980.) He knew virtually nothing of his estranged father's background other than that he was a Romanian Jew who emigrated to London as a young man. The trip, he suspected, would help him deal with the fact that, through much of his life, he had neglected (and even denied) his Jewish heritage. The civil war in Yugoslavia also pressed home on him the realization that the Balkans were more than a global hot spot—they were also his family's old home. From this welter of factors he formed the idea of walking through eastern Europe to connect the two halves of himself, northern Aryan (his mother was from Hamburg) and southern Jew. The result, this book, is lush with personality and anecdote on subjects ranging from the author's shrewd reading of the nature of life behind the now vanished Iron Curtain to eastern European youth's ``tangible sense of self-worth'' in the face of drastic economic decline and hardship. ``It was the society itself that had fallen apart,'' he writes, ``and it was clear that they thought of themselves as part of the solution.'' When, with luck, he finds in the town of Botoani, in Romania, the original record of his father's birth, he notes that ``the handwritten page had for me something of the quality of . . . a piece of clothing that a loved person might have left behind.'' Simon is a connoisseur of travel and travel writing, and his story shines with an understated brilliance. He weaves a vibrant, detailed tapestry of character and experience; his discoveries are manifold. (map, not seen)