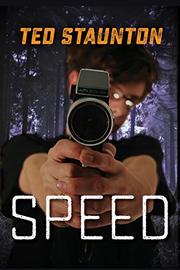 From the Seven Prequels series

A budding filmmaker finds opportunity and mystery on a camping trip with his family.

Spencer is on a camping trip with his developmentally delayed younger brother, Bunny, and their mildly mysterious grandfather David. Spencer gets caught up with War of 1812 re-enactors who are being filmed by a group of college students. Since he has a growing interest in moviemaking, the whole process is very appealing for Spencer. The college students take him on as an assistant, a duty Spencer must balance against trying to figure out where his wily brother has disappeared to. Although hints to that mystery abound, ultimately they come to nothing at all; either Bunny isn’t missing, or it doesn’t matter that he is. (Bunny tells his own version of this camping trip in companion novel Weerdest Day Ever!, by Richard Scrimger.) A secondary issue is that one re-enactor seems to be hatching a scheme that perhaps reveals yet another mystery about David. Spencer’s voice is authentic and amusing, but the mystery is never especially compelling. While Staunton spun perfectly fine mysteries starring an older Spencer in Jump Cut (2012) and Coda (2014), he seems particularly hamstrung by the necessity of writing for a younger audience, with the result that the plot fizzles.

An average mystery for an uncertain audience.